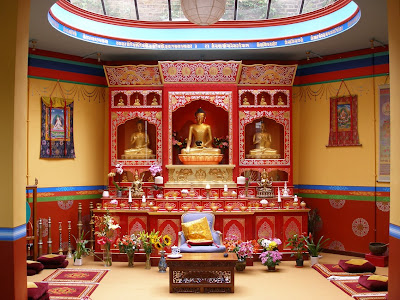 A shrine at the London Samye Dzong Buddhist centre. decoration design by Tashi Mannox 2007-09, applied gold and silver leaf.
The Five Buddha families also known in Sanskrit as the Five Dhyani Buddhas, traditionally take pride of place in their many representations, in Mandala paintings to decorative embellishments on shrines, (such as the image above and below) They make take form simply as their respective seed syllable representation or as a full set 3D Buddha statue images, depicted in their own colours, symbolic emblems, hand gestures Mudra and animal throne, all representative of each of their individual wisdom quality.

The Seed syllables in Lanza Sanskrit, arranged in relation to their cardinal direction, these are indicated and numbered in the photo and listed below:
1. Om, center, Virochana Buddha.
2. Hum, East, Akshobya Buddha.
3. Tram, south, Ratnasambhava Buddha.
4. Hri, West, Amitabha Buddha.
5. Ah, North, Amoghasiddhi Buddha.
For more explanation on the symbolism and meaning of the Five Buddha families visit here. 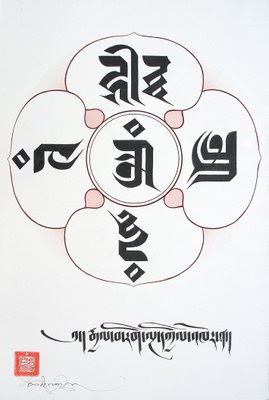 Calligraphy of the five Buddha lotus mandala, Tashi Mannox 2009.
The Five Buddhas form a base of a Mandala, the above lotus mandala shows each of the Buddhas seed syllables in the Lanza Sanskrit, Om at the central point, Hum below in the Eastern quarter, arranged around clockwise, following the suns path, are Tram, Hri and Ah.

There is variation in representation of place and colour relating to the directions, for example the Om and hum can be switched, the examples shown here are according to the Tibetan Buddhist Tradition.
When writing the syllables normally from left to right, they follow in their respected order: Om, hum, Tram, Hri, Ah, as shown below. However when relating each of these letters to their assigned central and cardinal directions, the order is changed, This is apparent in the Five Buddha crown shown below and on the shrine canopy above. 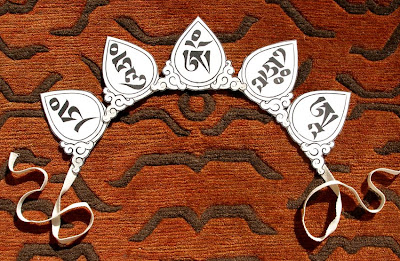 The five Buddha crown, known as rig nga in Tibetan, here represented in the Uchen script style. Hand made by Tashi Mannox 2008.
Each of the Five Buddhas are associated with their own family and the conversion of the Five Mind Poisons into the Five Wisdoms:
1. Om, Virochana, Buddha family. Ignorance converts to all accommodating wisdom.
2. Hum, Akshobya, Vajra Buddha family. Hate/anger converts to mirror like wisdom.
3. Tram, Ratnasambhava  Jewel Buddha family. Greed/pride converts to equanimity equality wisdom.