As the central figure to the Kagyu linage, the mantra to ask for blessing of the Karmapa is pronounced karmapa chénno which translates as 'Karmapa here me/take heed'.
Here is the same mantra in the Horyig seal script, shown to Tashi as one of his first encounters with the seal script. It was this that captured his inquisitive nature and stated his journey in learning the specialized seal script. 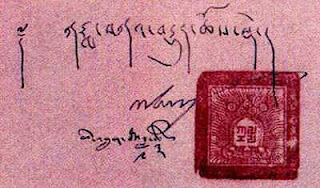 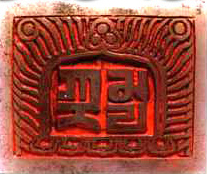 
Once upon a time... In June 1996 Tashi visited Tsurphu monastery along with Akong Rinpoche and his brother Lama Yeshe Losal, to meet the young 17th Karmapa. This was a particularly special occasion,  as for Lama Yeshe and Tashi, it was the first time they had seen the Karmapa since his previous incarnation.
One particular day Akong Rinpoche together with Tashi organized an audience with the Karmapa. The main purpose of this meeting was to take measurements so that Tashi could make robes for the Karmapa at a later date.
Much of the day was spent in the Karmapa's private quarters where games where played with much enjoyment and laughter.
It was decided to offer Karmapa an embroidered badge, which He liked as something to give to every one of the monks in the monastery representing Tsurphu.
As in the Photo, all three huddled around Karmapa's seat table to plot out how the badge should look. Above is a rough sketch that was made by Tashi at the time under the instructions from both Karmapa and Akong, additional marks were added by Karmapa, such as the curls at the top as he explained the decorated surround of the Dharma wheel and swirls to the scroll. Below He added the moon and the sun and even wrote moon and sun next to them. The design session ended with how to draw a star.
Fresh in mind and sketch in hand, Tashi returned to Scotland where he requested Sherab Palden Beru a master of Tibetan art, to create a design based on Karmapa's instruction. The design at the top of this post was created by one of Sherabs students under his direction.
Tashi then contacted some Buddhist friends, Tony and Rose, he had met earlier in that year, who happened to run a badge making business in Australia called 'Badger Makes Badges'. The artwork was sent to them around the globe and being devoted to Karmapa, hundreds of beautifully embroider badges where returned to Scotland and offered to Karmapa by Akong Rinpoche on his next returning visit to Tibet.
THE END
❖
Another Karmapa related post on the Karmapa's dream flag can be followed here.
Posted by inkessential at 18:10 1 comment:

The Swastika is estimated to be a 3,000 year old symbol that is important to most of the worlds cultures for its sacred symbolism. A powerful image that in recent history; has been corrupted by a more unfortunate Nazis association.
The word 'swastika' is Sanskrit pronounced 'svastika'. Some of the earliest examples of the 卍 symbol can be found in India.
Below shows the convoluted swastika pattern as part of the elaborate stone carving on the Dharmekh Stupa in Sarnath near Varanasi.
Such patterns are probably the origin of the Sayagata design, as shown above, which as a pattern on cloth, furniture, and architectural decoration, is widely reproduced across Tibet, Mongolia, China and Japan, in fact just about everywhere across the far East.

The stupa at Sarnath is built on the spot where the Buddha gave his first teaching after attaining enlightenment, known as the dear park, located North-East of Varanasi.
The first construction of the stupa was during the reign of Emperor Ashoka (2nd century B.C.). It was later rebuilt to its present form in the early 6th century.
In more recent times  a stone tablet was discovered in the center of the stupa with the word Dhamekha, this can be translated as Dharma Chakra, meaning "turning the wheel of the Dharma." which coincides with the records of Buddha's first sermon, when he "set the wheel of Dharma into motion."


For Tibetans the swastika is used by both Buddhists and the pre-Buddhist religion called Bön, the symbol is generally differentiated by the direction that the swastika turns. The Buddhist version turns with the arms pointing clockwise ࿗ where as the Bön swastika spins anti-clockwise ࿘

Here is an example of a 'heading' character of a Bön script called Zhang Zhung or smar-chen སྨར་ཆེན་ in Tibetan, the swastika used as part of the character is turning anti-clockwise.

More of the Zhang Zhung script spells out 'yung drung'  གཡུང་དྲུང་  in Tibetan, Which is the word used for swastika and translates as "rest unshakably" or "unchanging well-being"
Above is a calligraphy art piece by Tashi using the words g.young drung གཡུང་དྲུང་ to form the shape of a swastika. In India, Tibet, China and Japan, the swastika is considered a symbol of good luck.

The famous Parthenon Παρθενων has stood proud at the Acropolis in Athens for the past 2,500 years. Like many ancient Greek architectural embellishments, the swastika σβάστικα is popular as a decorative theme. The Above carved detail is perhaps from the Roman occupation of the Parthenon, which demonstrates the favored use of the swastika as design feature.

࿗
Posted by inkessential at 18:07 No comments: 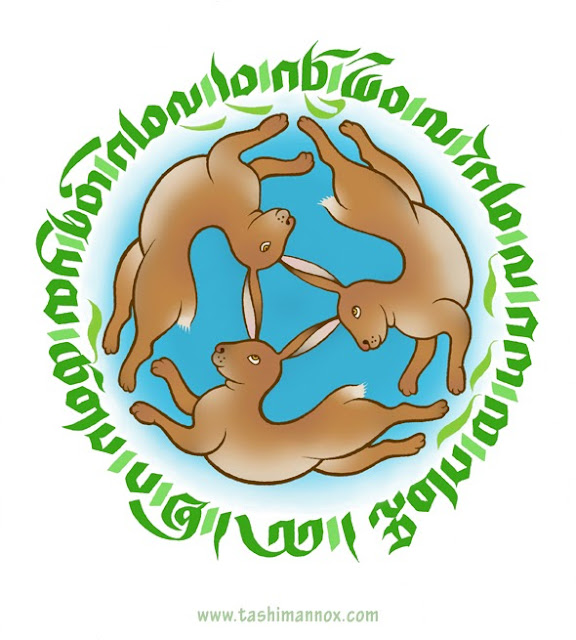 All the very best
for a happy
and prosperous
year of the
female Iron Rabbit. 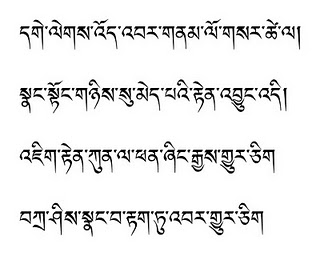 "As the light of this New Year blazes
With excellent virtue and happiness
May these dependently arising appearances inseparable from emptiness,
Bring benefit and prosperity in all the worlds there are,
May the light of auspiciousness always blaze bright"


Shortly after leaving the monastery at the dawn of the new millennium; Tashi put his brush to paper and created a calligraphy of the Mani mantra, oṃ maṇi padme hūṃ. an obvious topic choice for a calligraphy considering the meaningful depth of the Mani mantra and the blessing it so powerfully exudes, equally so, the form of the letters were a test of his abilities to create well with a brush, a challenge that engages Tashi until this day.
Entering the digital world with Tashi's first website in 2002, he published the above piece as part of his art collection, little did he know the extent to which this particular image has been copied and reproduced, published on multiple blogs and websites, often unknown by the authors who the original creator of the image is. It seems it has become a popular example of the Mani mantra, admired by many and quite righty so, as it is said that by merely seeing or hearing the Mantra creates an auspicious connection to what is ultimately pure. (see Pure Perception)

By 2005 Tashi had created other calligraphy pieces of the Mantra, one of which as a workshop demonstration and explanation of it's meaning during his 're-newal' exhibition in New York City 2002, this piece was sold while the ink was still wet on the paper.
While in South Italy in 2005, Tashi created the above calligraphy, which perhaps a little more orderly than his first attempt in 2000. This image was published on the well known 'Visible Mantra' website in 2007 and has since become top of the list when searching for images of the 'Mani mantra' in a web browser, this has also become a popular reproduced image.

More recently in 2010, Tashi created the above calligraphy of the Mani mantra with the addition of the seed syllable hri.

For more written on the Mani mantra: please click here.
Posted by inkessential at 16:34 2 comments: