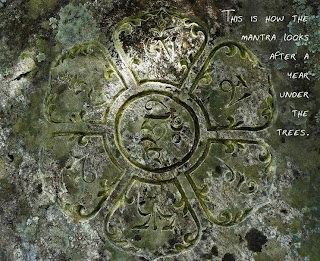 The idiom "set in stone" is generally a metaphor for something 'firmly established', be it a set of rules or a schedule difficult to change. Yet for an artist it may have a more literal meaning as to have their creations carved in stone. This is evident with the highly skilled stonemasons of the bygone middle-age Europe, who erected lofty Cathedrals of stone that seem to defy the law of gravity.
While on the other side of two continents high up on the Tibetan plateau; sacred mantras were carved in stone as a different form of devotional practice.
Yet despite social change and religious degeneration, the robust nature of stone has stood the test of time, proving itself as a medium to be one of the best in longevity.

Earlier this year of 2013, Tashi was contacted by a Frenchman Yann Devorsine, also a fellow Tibetan Buddhist and a stonemason.
Yann had spent some years living the Kingdom of Bhutan, where he had been given the opportunity to practice his skill carving mantras and prayers in the local landscape. A suitable place for such rock carvings, as the tradition of carving mantras on stone has been a historical practice reaching across the broad length of the Himalayas as far as Mustang and North into Tibet and Mongolia.

Yann asked Tashi for the use of one of his calligraphy designs on a particular boulder in Bhutan, which opened up a partnership in carving devotional mantras and prayers on stone in Europe.

More recently Yann carved Tashi's calligraphy for a friend in Algarve, Portugal. The natural landscape  of the landowner provided handsome boulders in which several different mantras and seed syllables could be deeply incised or to stand proud, both catching the light to dramatic effects in contrast; revealing the beauty of these sacred characters firmly set in stone for many generations to come. 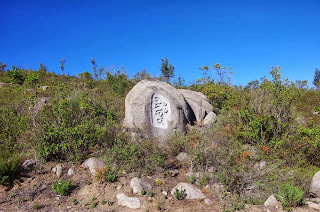 See more of Yann's work on his personal website here.

Email ThisBlogThis!Share to TwitterShare to FacebookShare to Pinterest
Labels: Calligraphy in stone. 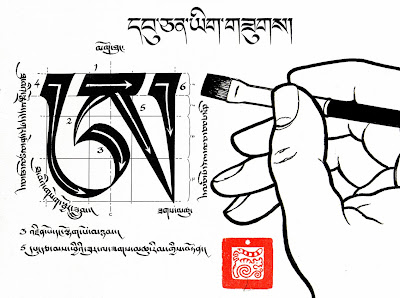 Drawing upon the traditional construction guidelines of the classical Uchen script, Tashi Mannox leads an intensive course in how to correctly form the letters of the Tibetan alphabet, vowels signs and subjoined letters.

This is a workshop suitable for beginners who wish to learn a firm foundation in writing Tibetan, as well as for those more advanced who wish to further their skills in Tibetan calligraphy.

Tashi will also give a public talk on the role of Calligraphy and art within Dharma on Friday 14th Feb 2014, as advertised on the venue website.

For further information and bookings for the weekend workshop, please follow the link here:

The weekend workshop will be taught in English with translators in french if needed. If attending the workshop it is advised to bring along your own writing implements and materials, here is a check list for you:

If you find the above website difficult to navigate in French, you can directly email Argiro, the event organiser who can provide payment details to book your place.

Posted by inkessential at 10:59 No comments: