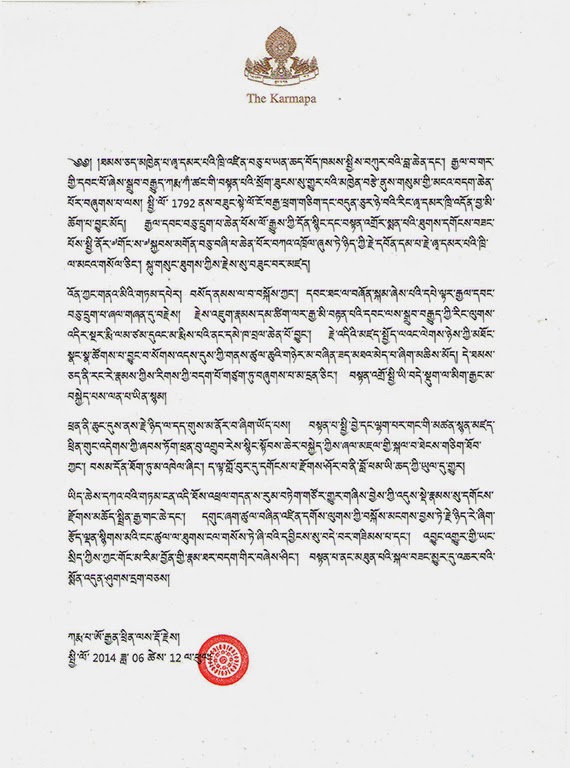 Statement by His Holiness the 17th Gyalwang Karmapa Ogyen Trinley Dorje on the Passing of Kunzig Shamar Rinpoche, Mipham Chokyi Lodro.
Until the 10th Shamarpa, the omniscient Shamarpas have been great masters respected throughout Tibet, especially within the Karma Kamtsang Lineage where he was known as the Victorious Lord of Dance and the lineage’s strength and embodiment of wisdom, compassion and power. Despite a ban on the Shamarpas’ enthronement since 1792 for almost a century and seventy years, His Holiness the 16th Gyalwang Karmapa, in view of historical significance and for the benefit of Buddhadharma and all beings, sought consent from His Holiness the 14th Dalai Lama and enthroned his nephew as the Shamarpa, taking him under his wing for the guidance of his body, speech and mind.
However, as the folk saying goes, one may be fortunate to have a cow but not enough to get its milk. Similarly, after the Parinirvana of the16th Gyalwang Karmapa, due to wavering of commitment amongst his followers, a great schism occurred within the lineage. It was an unprecedented disharmony that is unimaginable even in a dream. Shamar Rinpoche’s activities have also been in various forms, both favourable and unfavourable and likewise, there are many past circumstances similar to endless ripples across water. These unfortunate situations are, I think, simply due to us not being aware of the omnipresence of our root guru and not being able to generate farsightedness for the benefit of Buddhadharma and all sentient beings.
I have had an unmistakable faith and respect towards Rinpoche from the time I was young. Therefore, with the hope of benefiting the Buddhadharma in general and the lineage in particular, and with the expectation that I may be able to offer some service towards his Dharma activities, I had the good fortune of meeting Rinpoche once. Yet, as my aspirations have not been fulfilled, his sudden passing away is a matter of great sadness.
As soon as I came to know of this hard to believe news, I instructed Rumtek Monastery, the main seat of our lineage and other monasteries to make offerings and perform pujas as grand as possible for 49 days, as Rinpoche has taken rest from the degenerate age of strife into the expanse of peace for a while.
With great hope and strong aspirations that Shamar Rinpoche’s reincarnation will embody the life stories of his predecessors, and the good fortune of harmony within the lineage will arise soon.
Karmapa Ogyen Trinley Dorje


* The 'Karma Kagyu Publishing House' is no longer in operation, this at the time was comprised of the three main seats of the Karma Kagyu in the West during the 70's and 80's :
D.K.L. Montignac, Dordogn, France.
K.T.D. Woodstock, New York State, U.S.A.
K.D.D.L. (Samye Ling) Dumfriesshire, Scotland, UK.

Posted by inkessential at 15:13 No comments: