Learn the art of Tibetan calligraphy in Italy


This is the first time Tashi Mannox instructs Tibetan calligraphy in Italy. Two intensive weekend courses in two beautiful locations of Venice and Merigar West in Tuscany.
The first workshop in Venice covers how to write the classical Uchen script to the correct traditional proportions that will lay a firm foundation in confidently writing elegant calligraphy.
The second workshop a week later in Tuscany teaches how to write the Tsugtung style of the Umed script category. This course is more suited to those with some knowledge of the Tibetan written language.

The course will be in English and if necessary it will be translated into Italian.

Rates:  €150 including coffee / tea breaks with biscuits snacks drinks and fruit inside You can book the excellent vegetarian lunch it costs €15.

€250 if attending both workshops, in Venice (Uchen) and Merigar (Umed).

Accomodation Facilities: besides recommended Hotels and B&B in Venice, there will be the possibility of sleeping, booking in the meditation room at the meditation centre Kagiusamyedzong in Venice located in Fondamenta dei Tolentini, the room can take maximum 6 people sleeping bags are requested and a minimum offer of €15 / night is recommended. http://www.kagyu.it/


The course will be in English and if necessary it will be translated into Italian.

Rates:  €150 including coffee / tea breaks with biscuits snacks drinks and fruit inside You can book the excellent vegetarian lunch it costs €15.

€250 if attending both workshops, in Venice (Uchen) and Merigar (Umed).

Info and registration: call Yesan phone 0039 3200758117  or send an email at:  courses@shangshunginstitute.org

Accomodation Facilities: Merigar offers plenty of accommodation types to its visitors. you can choose from a list of budget to upper class solutions by visiting the website here.

Email ThisBlogThis!Share to TwitterShare to FacebookShare to Pinterest
Labels: workshop 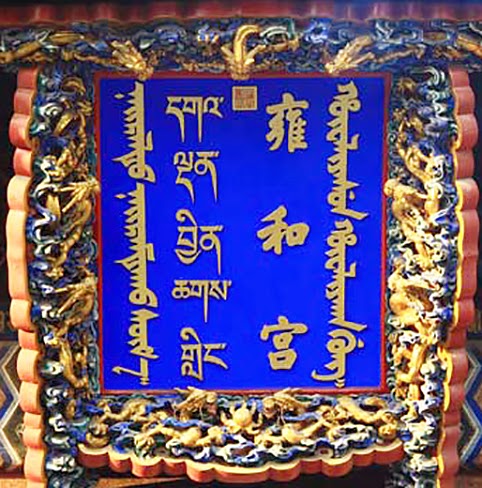 All across Asia, calligraphy carved into wood is traditionally used to prominently display building names, placed above doorways of temples, palaces and shops.
The natural grain and figure of wood makes a beautiful natural ground for fine calligraphy, a match made in heaven, or painted in the classical combination of lapis blue with gilt gold letters carved in relief, such as the above sign that sits pride of place over the main entrance of the Lama temple in Beijing.
Also common on temples in Tibet, this sign gives the name "The blessed place of tushita heavenly joy" typically in three languages: Mongolian, Tibetan and Chinese.

A contemporary combination of natural wood and calligraphy has been artfully explored by Vermont based Tim Brookes, who runs the worthy 'Endangered Alphabets Project'.
Tim recently contacted Tashi to carve his Tibetan calligraphy in wood, an on-going project that in time will boast a number of hand carved master pieces, which are intended to raise funds toward Rokpa International that has many projects in the Tibetan homeland, such as the preservation and education of the Tibetan language. 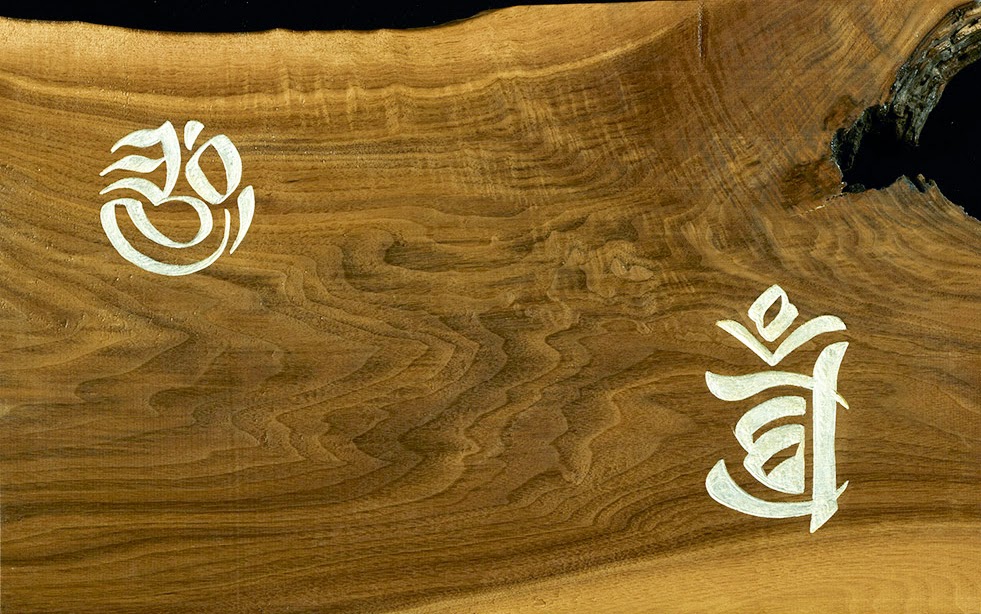 Above, "Moon over Water" is a piece created by Tim Brookes using calligraphy by Tashi Mannox, the top left ideograph is the word moon the Tibetan Drutsa script. Below right is a Wartu Sanskrit monogram of two words Eh and Vam. for a greater explanation of Eh-Vam, please follow the link here.

Here below is another wood carving shown though the process of creation by the skilful hand of Tim Brookers, once again using a Tashi calligraphy as the subject. The words "Graceful Kindness"arranged as a circular design is also a popular tattoo design and available  as a high resolution down-load. 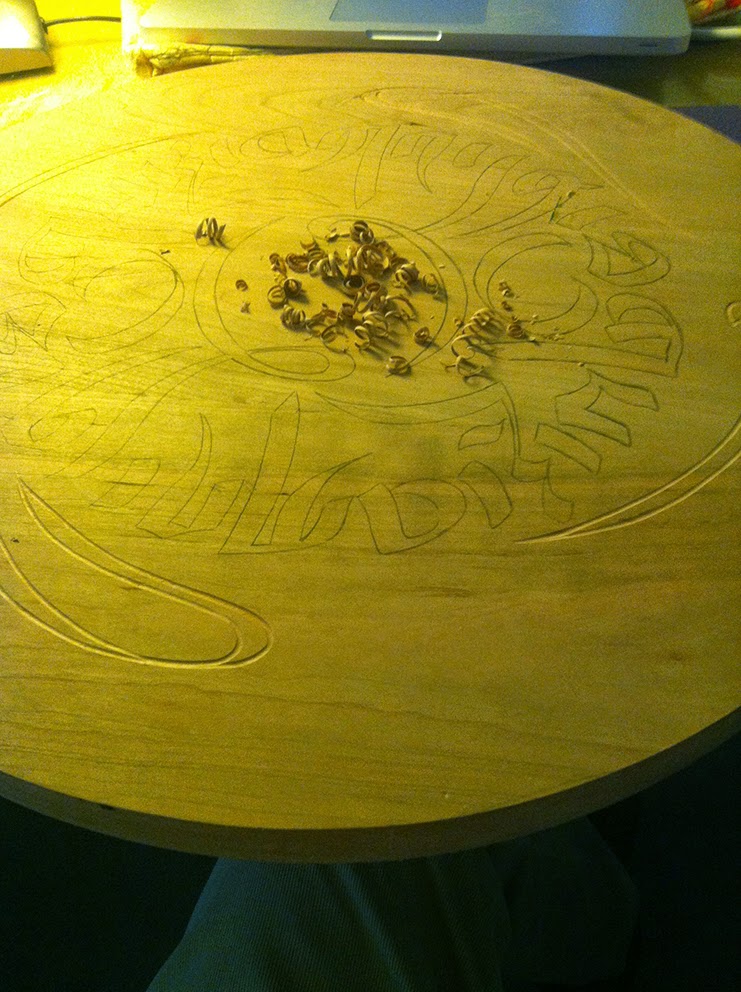 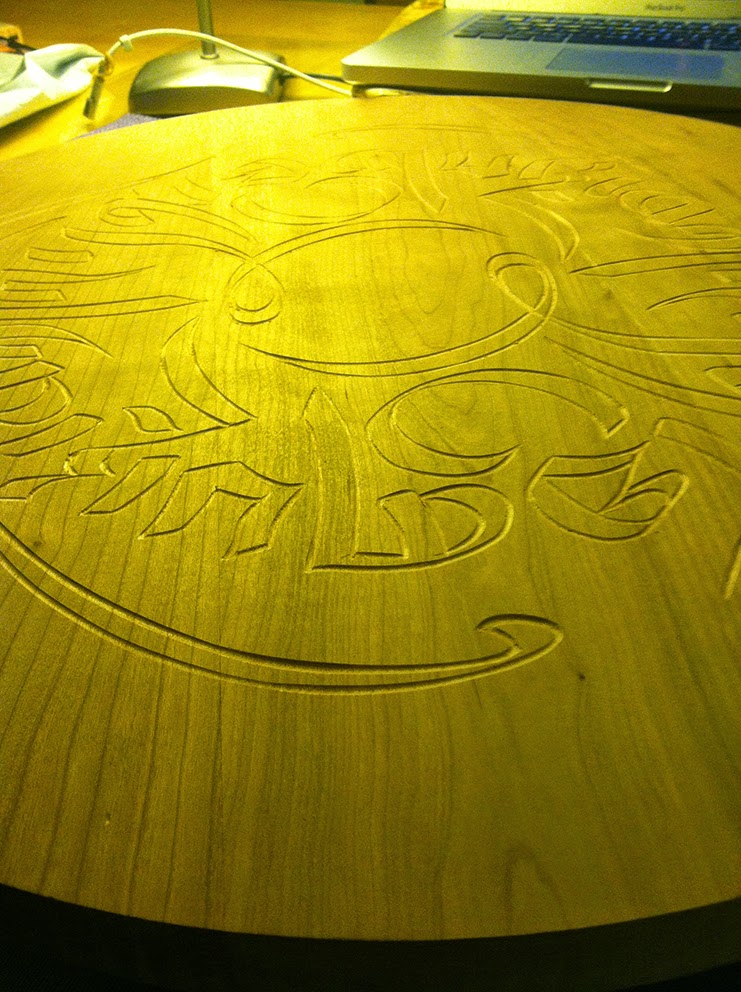 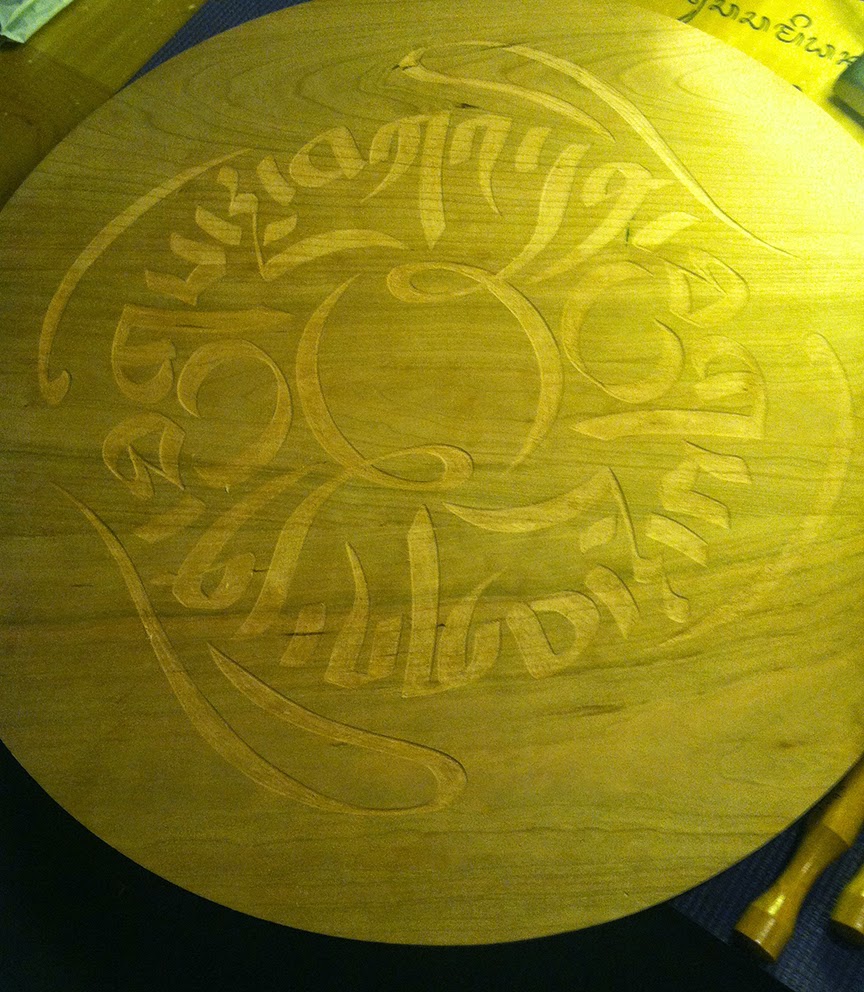 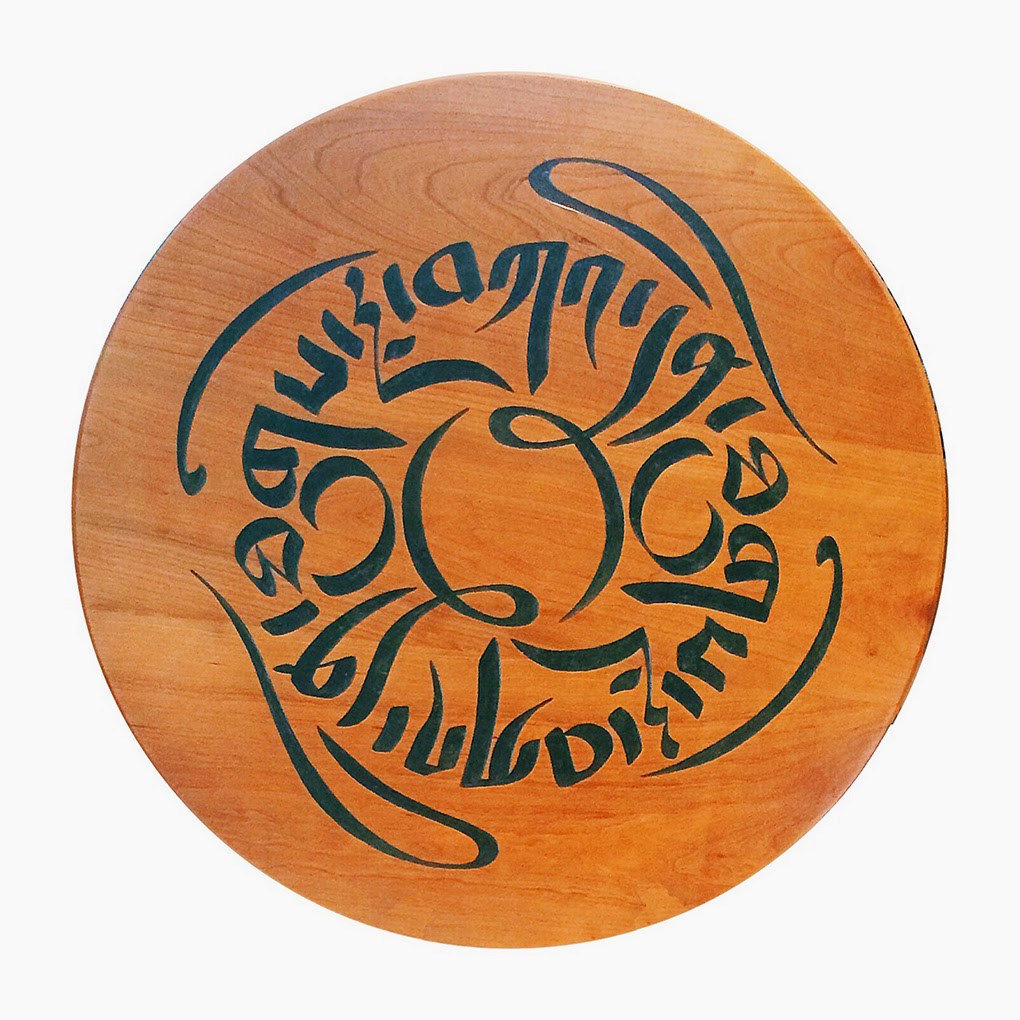 The below image shows the Tibetan syllable hum, that was hand carved by another artist Mel Du Pontet, in a piece of English Yew wood some 20 years ago. The piece has aged a beautiful rich colour. A piece of Boltic amber fills a knot hole that incorporates part of the syllable, this is the ma sound that represents the sun, below which is a crescent moon,  both symbols are part of the whole character that has been gilded in real gold leaf. Here 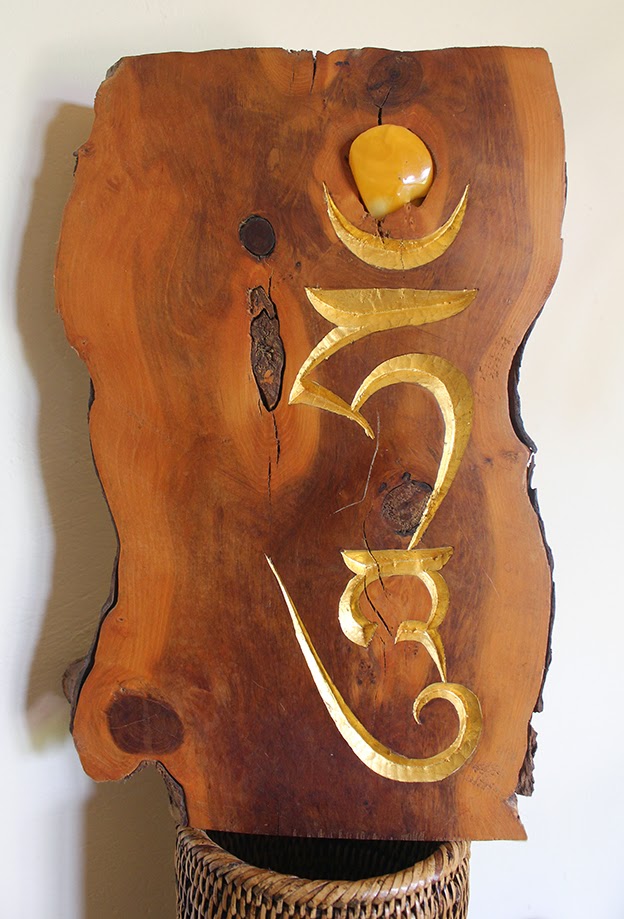 Posted by inkessential at 22:07 No comments: