In regard to the beautiful creation above, Leslie Rinchen Wongmo, master of Traditional Thangka appliqué quotes:
"Manjushri is the embodiment of all the buddhas’ wisdom. His flaming double-edged sword cuts through layers of misconception to discriminate clearly between the independent way things deceptively appear to exist and the interdependent way in with they actually arise. Resting on a lotus in his left hand is the text of the Perfection of Wisdom sutra, considered to be the Buddha’s most profound teaching on the ultimate nature of reality."
Leslie recently posted a blog about her personal seal design she originally commissioned Tashi to create and tells the story of how she chanced on meeting Tashi, how he created her seal design that ten years on become the logo for her new website 'threads of awakening' showing her beautiful appliqué masterpieces.
If you are interested in commissioning your own bespoke seal that can also be used as a logo, all that you need to know about seal design and how to order is clearly explained on the page link here:
www.tashimannox.com.
རྒྱ་
Posted by inkessential at 00:05 3 comments:

An expressive calligraphy of the word 'moustache' in Tibetan Drutsa script.
His Holiness the 13th Dalai Lama sporting a rather dapper mustache; the fashionable look of a gentleman in the 19th century.
The 13th Dalai Lama predicted the 1959 Chinese invasion of Tibetan and announced that he would die early, in order that his incarnation successor, the 14th Dalai Lama Tenzin Gyatso, would be old enough to act as a leader of the Tibetan people at the time of the invasion. He died a few months later in Lhasa, December 1933.

An explanation of the five skull paintings series called
Laughing in the Face of Death,
To live and die without regret.
During 2006 into 2007 Tashi Mannox focused on creating a set of five iconographic masterpieces that are steeped in Tibetan Buddhist wisdoms. Each piece took two to three months of meticulous application, using modern and traditional techniques of Thanka painting.

In Tibetan iconography the skull is symbolic of impermanence, as Tibetans in general have a more positive attitude to death because of their Buddhist faith, the skull is often depicted as if laughing. Tashi's five skull paintings show happy almost manic grinning skulls, each of these expresses a different emotion, from a wrathful to a more peaceful expression.
The series of paintings migrate from one to the next through different mood stages, symbolizing the transition from death to re-birth, known as the bardo in Tibetan that translated as ‘between stage’.
Each of the different moods can also be depicted as the transformation of the five ‘mind poisons’ into the ‘five wisdoms’, associated with the Five ‘Buddha families’.
This is a popular Tibetan Buddhist theme, that Tashi has illuminated to his own interpretation, draws from his training in Tibetan Buddhist philosophy and iconography.

“A Buddhist practitioner, a Yogi or Yogini, strives to live without harming others and themselves, up to the point of death without any regrets, knowing that they have led a full and meaningful life, and thus able to look into the face of death confidently, laughing without fear.
For such a practitioner the time of death is a great opportunity.
But because generally as a non-practitioner we do not know ourselves, we are ignorant, and fear death, the ultimate unknown”.

Tashi’s intention is that for the viewer of the five paintings, there can be much to contemplate. From standing back and comparing each of the skulls with each other, perhaps noting their subtle change in facial expression, different use of colour and pattern, to moving up close to peer into their void like eternally dark eyes.

“Looking into the faces of the skulls in the series is somewhat like looking at oneself, a suggestion of ones inner self and emotions, rather like looking into a mirror of the soul: it may not be an entirely comfortable experience, but there is a familiarity, which is honest and beautiful at the same time”.

This brings up the point of the general Western attitude to death and emotions, which is somewhat morbid, hidden and generally swept under the carpet. Facing images of death maybe somewhat challenging, but with courage of heart, one can laugh in the face of death and the emotional trappings, overcoming ones fears and transforming a negative into a positive.

The five painting are displayed in a specific order as numbered and explained below: 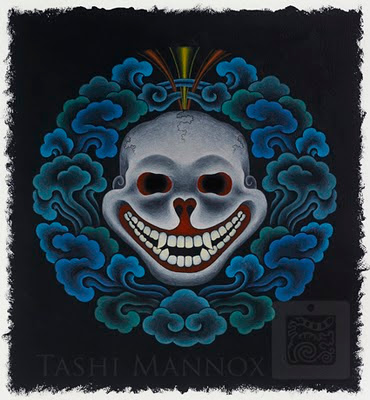 1. ‘Laughing in the face of Anger’ 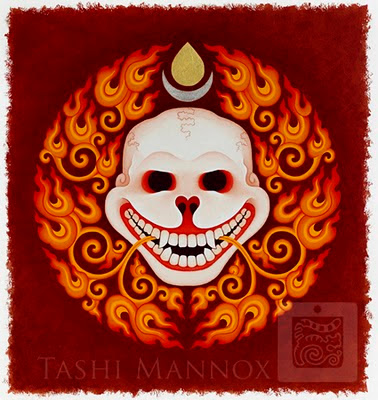 2. ‘Laughing in the face of Attachment’

Next is red in colour, of passion and attachment, avarice is all consuming like a fire that burns up with devastating destruction. The antidote of grasping is generosity, a great wisdom to practice. 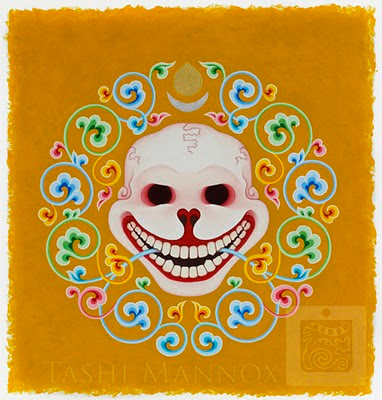 3. ‘Laughing in the face of Pride’

Golden yellow is the colour of riches of the earth and the adornment of the self. The mood of this piece is pride, elaborate and princely. Pride converts to humility and respect as a wisdom. 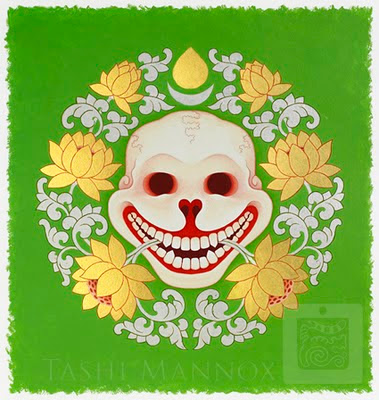 4. ‘Laughing in the face of Jealousy’

Green is the colour of energy and envy. This deluded and sneaky jealous emotion can be transformed into seeing all as the same, the wisdom of equanimity. 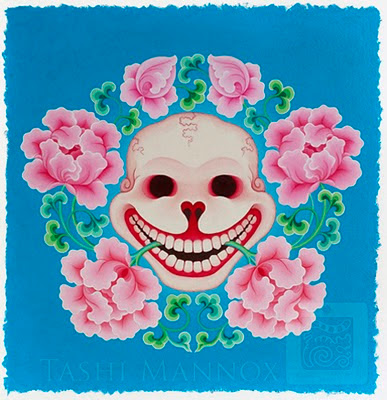 5. ‘Laughing in the face of Stupidity’

Lastly, blue is emptiness. Through taming one’s mind, one has the clear insight to find liberation from these emotions of ignorance. This is the freedom of wisdom, as vast and limitless as the blue sky. This symbolizes the bud of potential, to bloom with fruition, full and glorious.

The middle three skulls are crowned with the Sun and Moon motif, symbolising Wisdom and Compassion, the emblem of balance and harmony. 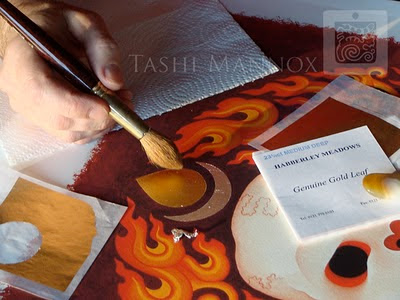 The "laughing in the face of Death" series is now available as excellent quality limited edition prints.
The reproductions are premium-quality giclée printed, on mould-made papers (the finest and oldest paper-making technique) of 310-315 g/m². The papers; Velin and Aquarelle 100% rag, are of museum conservation standard, ensures stability and UV colorfast ink longevity of more than 120 years.

Each image is carefully colour matched and in sharpness to the original artwork. The prints are hand signed with the edition number and stamped with the artists’ personal ‘water tiger’ seal.
Where gold and silver leaf have been used on originally artworks, the prints are carefully hand gilded to produce an authentic real gold and silver finish, otherwise not achieved to such a bright luster by printed reproduction alone.
Please note that not all of the smaller sized prints are possible to gild due to their petit finesse.

Prints can be ordered in a choice of three sizes, individually or as the set of five:

For prices and orders please follow the link here.

Posted by inkessential at 14:37 No comments:

For the first time in the Capital, the complimentary surroundings of the Jivamukti Yoga Centre in West London showcases a collection of Tashi Mannox's limited edition art prints. Featuring the iconic five skull paintings called the "Laughing in the face of Death"series, as below.

The exhibition opens on Sunday 16th October 2011 when at 6.45pm Tashi gives a short talk and  meditation. For more details click here. and here.

This event also coincides and runs as part of the Himalayan Film & Cultural Festival in London. The festival runs from 13-31st October that celebrates rich and varied cultures of the world's mightiest mountain range with film, music, art and photography. Follow the link here for more information.

Posted by inkessential at 22:37 No comments: