༄། པདྨ་འབྱུང་གནས་ལ་ན་མོ།
For Tibetans Guru Rinpoche or Padmasambhava in Sanskrit, is regarded as the second Buddha, who historically came to Tibet during the 8th century to transmit Vajrayana Buddhism. At that time Tibetans were known to be wild and unruly, a land to be subdued of its demons. Guru Rinpoche, meaning precious guru, tamed and established Buddhism in Tibet, founding the first monastic community at Samye in central Tibet. This formed the today's oldest tradition called the Nyingma school, which is very much the foundation of the other great schools of Tibetan Buddhism.
As a devotional practice, Guru rinpoche is considered to over-come inner and outer obstacles and therefore furthers ones spiritual progress inwardly and ones outer activity.
Padmasambhava has many names such as Guru Padma and Pema Jungne which mean lotus born. Iconographically he is often depicted seated on a lotus, as above, representing the purity and transformation. His pure land, as much a mind state of liberation, is the place of the copper-coloured Mountain in the North-West part of the sacred realm of Orgyen.

In the above calligraphy; the mantra of Pema Jungne is shown at the top in a high form of the Tibetan Uchen script, below which is the same mantra in an ancient Lantsha Sanskrit, the original written language from which much of the Buddhist teachings and practices were translated from into Tibetan. The mantra, very much a supplication of the attainment of 'siddhi' and blessing of body speech and mind. In Sanskrit the mantra is pronounced:
oṃ āḥ hūṃ vajra guru padma siddhi hūṃ
The smaller text and as the same in the calligraphy below is known as the 'Seven Line Prayer' of Guru Rinpoche: tsig dun sol deb, this translates as:
hum, to the North-West part of Orgyen, seated in a long stemmed lotus with anthers, such wonder! called lotus born - Pema Jungne, who achieved the highest of spiritual accomplishments and who is accompanied by myriads of Dakinis. I will act according to your example. Please come and grant me your blessing. guru pema siddhi hum.
Here the seven line prayer has been arranged surrounding the main 'hum' character, the seed syllable of Yidam Pema Jungne. This is a study piece demonstrating the Petsug script style and to work out the layout for the final art piece as shown below. It is often the case when executing a major calligraphy art piece, where a large amount of text needs to fit the confines of a space, the size of the lettering and spacing needs careful consideration and planning. 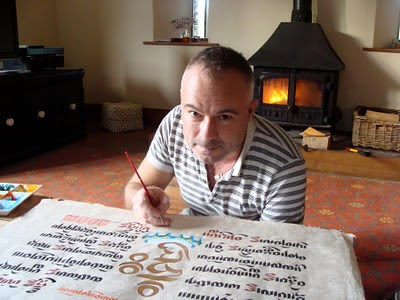 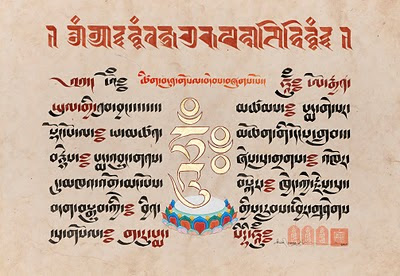 "Seven Line Prayer to Guru Rinpoche" © Tashi Mannox 2010
The final art piece painted in Japanese mineral paint on the robust Bhutanese Tsasho bark fiber paper.
The Seven Line Prayer flanking either-side of the large central character " hum" which is gilt in genuine 23½ ct gold leaf, representing the essential resplendence of Padmasambhava, this is seated on a silver white moon disc, representing purity, this in turn is seated on an open multi coloured lotus flower, representing the transformative nature within the Vajrayana.
The pith meaning of the practice is complete within the Sanskrit mantra, standing with Vajra pride across the top of the piece. At the very end of the calligraphy are three seals marked with 'hum', these represent the Triple sealed commitment, "sa ma ya". Finally finishing with the artists personal water tiger seal.
ས་མ་ཡཿ རྒྱ་རྒྱ་རྒྱཿ
Hand gilded limited addition prints are available in two sizes of this calligraphy of the Seven Line Prayer of Guru Rinpoche. For more information and how to order can be found on the link here. 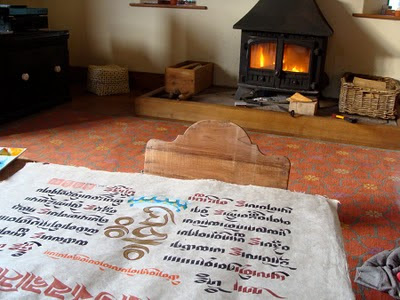