The calligraphy traditions of the world are many, each with their own unique style and beauty. Historically calligraphy has documented the greatest knowledge and wisdoms of the world, preserved and treasured as illuminated manuscripts.
In more resent times the calligraphy styles have developed into fonts, easily published; they have become powerful tools of communication in propaganda and prayers distributed as:

"May peace prevail on Earth"

Margaret Shepherd a well-known calligraphy artist and prolific author of dozens of books on calligraphy and how to write masterfully.
She has recently published another called "Learn World Calligraphy": an amply illustrated book that presents African, Arabic, Chinese, Ethiopic, Greek, Hebrew, Indian, Japanese, Korean, Mongolian, Russian, Thai and Tibetan calligraphy.
The above art piece called "The Heart of Emptiness" is among others of Tashi's works that are illustrated within the Tibetan Calligraphy section of the book.

The ‘written’ script represents a language, and a language represents thought. Therefore, one must be able to write a script that is understandable to all, that the meaning of the word is best honored as a beautiful art form called calligraphy. This is the integrity of the written language and the preservation of the knowledge that it upholds. Tashi Mannox 2011.
Posted by inkessential at 19:25 2 comments:

h.Art is Herefordshire's Open Studios tenth event, giving you exclusive access to artists' studios, workshops and special exhibitions. This year there are 103 fantastic venues spread across the whole county and borders. It is the perfect opportunity to meet the makers in relaxed surroundings, learn about their techniques and inspiration and perhaps buy a print or an original artwork.
For the first time Tashi Mannox exhibits in his home county Herefordshire. This will also be a première showing of his striking set of five "Laughing in the face of death" paintings as well as other first editions from his illuminated iconographic series, of which have been beautifully replicated as more affordable limited addition giclée prints. There is an opportunity to meet Tashi personally during the exhibition opening on Saturday 10th September, 7pm-9.30pm.
To see details of this exhibition and other Herefordshire art events, please follow the link here.
If you are unable to visit the exhibition and would like to order limited addition prints, there is a wider range of prints in different sizes available via the Tashi Mannox website.
Posted by inkessential at 11:24 No comments: 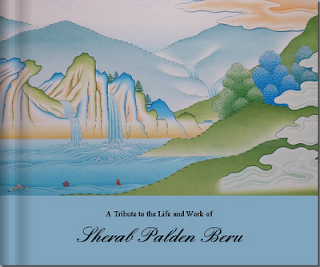 "For as long as space exists and living beings endure. May i too remain to dispel the misery of the world"
Posted by inkessential at 16:04 No comments: