For a high quality resolution copy of the above Dharma Wheel image and others please follow the link here.


The symbolism of the above Dharma wheel design:

1 - Around the central wheel at North, East, South and West) are small groupings of Three dots which to me represents the Four Noble Truths, as listed below.

2 - Also around the central wheel are four solitary dots NE, SE, SW, NW which to me represent the four sublime states.

3 - The wheel's three basic parts are symbols of the "three trainings" in Buddhist practice (wisdom, discipline and concentration): The hub symbolizes moral discipline, which stabilizes the mind. The eight spokes represent wisdom which is applied to defeat ignorance. The rim represents training in concentration, which holds everything else together.

More specifically the 8 spokes represent The Eight Fold Path, as listed below.

4 - Within the hub are three swirling sections (Gankyil) which to me will represent the indivisible essence of the Three Dharma Seals (Three Marks of Existence): Anatta, Dukkha, Anicca.

5 - The Lotus is one of the Eight Auspicious Symbols (The Dharma Wheel being one as well) and one of the most poignant representations of Buddhist teaching.

The roots of a lotus are in the mud, the stem grows up through the water, and the heavily scented flower lies pristinely above the water, basking in the sunlight. This pattern of growth signifies the progress of the soul from the primeval mud of materialism, through the waters of experience, and into the bright sunshine of enlightenment.

Though there are other water plants that bloom above the water, it is only the lotus which, owing to the strength of its stem, regularly rises eight to twelve inches above the surface.

The color of the lotus has an important bearing on the symbology associated with it:

White Lotus (Skt. pundarika; Tib. pad ma dkar po): This represents the state of spiritual perfection and total mental purity (bodhi). It is associated with the White Tara and proclaims her perfect nature, a quality which is reinforced by the color of her body.

Pink Lotus (Skt. padma; Tib. pad ma dmar po): This the supreme lotus, generally reserved for the highest deity. Thus naturally it is associated with the Great Buddha himself.

Red Lotus (Skt. kamala; Tib: pad ma chu skyes): This signifies the original nature and purity of the heart (hrdya). It is the lotus of love, compassion, passion and all other qualities of the heart. It is the flower of Avalokiteshvara, the bodhisattva of compassion.

Blue Lotus (Skt. utpala; Tib. ut pa la): This is a symbol of the victory of the spirit over the senses, and signifies the wisdom of knowledge. Not surprisingly, it is the preferred flower of Manjushri, the bodhisattva of wisdom.

6 - The scrolling coming from the lotus does not have any symbolism as far as I can find but to me will represent The Three Gems: Buddha, Dharma, Sangha.

7 - The front 5 petals of the lotus to me will represent the 5 Precepts.

8 - the symbol of a flame upon the lotus represents Nirvana.

Nirvana literally means "unbound' as in "Mind like fire unbound". This beautiful image is of a flame burning by itself. Just the flame, not something burning and giving off a flame. Picture a flame burning on a wick or stick, it seems to hover around or just above the thing burning. The flame seems to be independent of the thing burning but it clings to the stick and is bound to it. This sense of the flame being unbound has often been misunderstood to mean the flame is extinguished or blown out. This is completely opposite to the meaning of the symbol. The flame "burns" and gives light but is no longer bound to any combustible material. The flame is not blown out - the clinging and the clung to is extinguished. The flame of our true nature, which is awakening, burns independently. Ultimately Nirvana is beyond conception and intellectual understanding. Full understanding only comes through direct experience of this "state' which is beyond the limitations and definitions of space and time.

9 - The Smokey Mist like clouds which is emanating from the lotus flower from all directions and enveloping the dharma wheel represents the sweet fragrance of the dharma.

One of the most fundamental teachings of Buddha describing the way to end suffering is the principle of The Eightfold Path:

This list of Eight Right's, is a guideline to the cessation of confusion and suffering: Samara,
To reach self awakening: Nirvana. This is the fourth part of the Four Noble Truths, the first of the Eight Fold Path is the understanding of the Four Noble truths:

1. The nature of Suffering

2. The origin of Suffering

3. The cessation of suffering 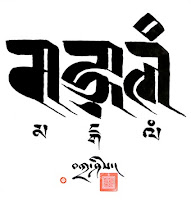