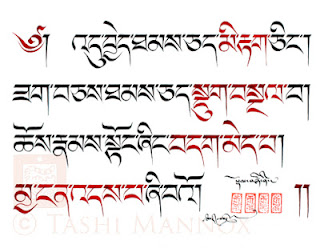 All that is conditioned is impermanent,
All that is tainted is suffering,
All phenomena are empty and devoid of self,
Nirvana is peace.
Posted by inkessential at 23:13 No comments:

Email ThisBlogThis!Share to TwitterShare to FacebookShare to Pinterest
Labels: Dharma

The Heart Sutra and its mantra, nick named the Gaté mantra, is a continued inspiration for a number of Tashi's art pieces over the years. Recently Tashi was commissioned to create two new calligraphy pieces based on earlier artworks he had created. This following post tells something of the techniques used to create these masterpieces and the challenge in capturing their subtle qualities photographically in order to replicate as giclée prints.

In reference to the above image "The Heart of Emptiness". The central 'empty space of natural paper' is created by the Gaté mantra: "om gaté gaté para gaté para sam gaté bodhi swaha" encircling anti-clockwise, though to read the mantra from a stationary point (starting at the bottom) the mantra/paper would turn clockwise. The tails of the letters extend out into the darkness of space, whereas the vowel signs that sit above the letters are unavoidably left within the empty white space.
Across the whole of the black background is painted in another layer of black ink an extract from the Heart Sutra.


"The Heart of Emptiness" is available as a limited edition print, please follow this link.

To arrange a length of calligraphy in a complete circle has a number of stages and difficulties. First is to choose the size of the letters which is determined by the width of the brush (the proportionate relation between the size of the brush or pen nib is explained in an earlier post here)
To begin with there is a fair amount of estimated guess work to fathom the right size length of text to fit in complete circle harmoniously within the limited size of the paper.

In the case of creating a circular Gaté mantra, three attempts were made that are shown as a collection of studies  below.
These four studies on about A2 size water-colour paper can be viewed as individual art pieces here. 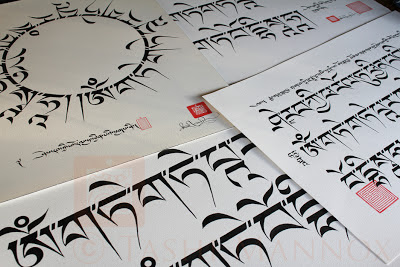 Only once the right size lettering is found to complete the right size circle of text; can this be applied with held breath to the actual artwork, such as "The Heart of Emptiness". 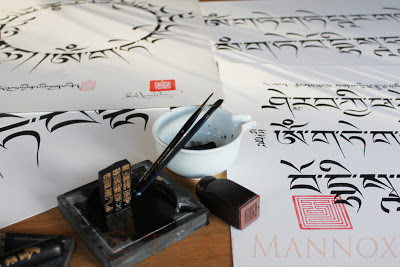 Another art piece inspired by the Heart Sutra shown below is called "None Attainment"that highlights one of the aspects taught through the Heart Sutra that expresses 'no concept' of anything that has 'gone beyond'.
The artwork depicts the words 'no attainment' in white lettering that appears to shine out over the black background where hidden is the title of the Heart Sutra as well as its mantra.

Both pieces; "The Heart of Emptiness" and "None Attainment" belong to Tashi's 'Black on Black' series that explores the coined technique of painting black calligraphy on black background, the effect of which gives a mysterious half hidden calligraphy that can be picked out because of the reflective quality of the ink.

Such reflective qualities are problematic to photograph because only one of the reflective moods can be captured at any one time dependent on how the image is lit.

The below examples shows two very different ways in which the black on black calligraphy and background is exposed. In other light condition the background lettering can seen to disappear altogether.
On the left side image the photograph has picked up the lettering as black with the background more reflective and a lighter tone.
On the right side the lettering is reflecting lighter the black background completely inverted to the image on the left. 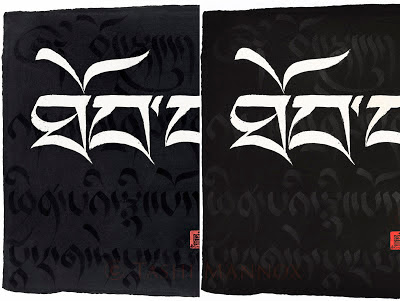 When reproduced as prints, that is totally reliant on the quality of the photograph, the subtle reflective quality that reveals its self when viewing the original art work, is somewhat limited in the print productions, never-the-less they still stand as strong printed artworks in their own right. 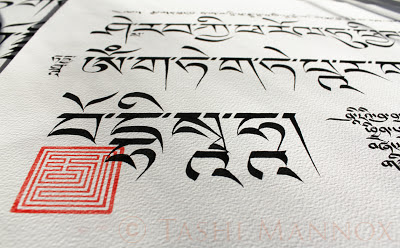