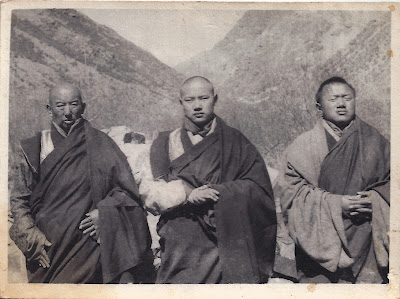 A rare and remarkable old photo of the 16th Karmapa flanked on his right by the 11th Situpa and to his left the 6th Ponlop Rinpoche.

The photo is believed to be taken in the Late 1940's early 50's near to the seat Tsurpu Monastery of the Karmapa's who is the head of the Kagyu linage.

These three great Kagyu Lamas have since incarnated to continue their linage as realized teachers to benefit all sentient beings.

It is notable that all three present incarnations are great calligraphy artists. The previous Ponlop Rinpoche was also an accomplished Thanka painter, who has continued his talents in a new medium  till the present day.

In old Tibet, at the time of the above photo, calligraphy was practiced as a discipline to a high degree, however was not created as a free expressive art-form as it is in the Japanese Zen tradition. It is only through these new incarnate Lamas, who are engaged with communicating Dharma in the world away from Tibet, that Tibetan calligraphy has developed and established a new expression.

Another great Lama and Kagyu linage holder Chogyam Trungpa Rinpoche and was the first to make this new artistic leap, while establishing Buddha Dharma during the 70's and 80's in America.
Trungpa Rinpoche created expressive calligraphy art that was a bold and free break-away from the precis Tibetan handwriting styles, followed closely by 12th Tai Situ Rinpoche. Though it is not clear if it was Trungpa who set the new trend or if there was a general awakening of creative expression.

If it was not for the brilliance and initiative of the early Tibetan Lamas communicating Dharma, there would not be such a strong and lively practice of Tibetan calligraphy that has established its own place within the contemporary art world.