Dependent Origination: Natural Law, Honorific Uchen script, Tashi Mannox 2009
Dependent origination translates as loosely as Natural law, which is the law of Karma and existence, underpinning the cycle of rebirth and the cause of suffering.

Kalu Rinpoche explained this cycle in relation to the Four Noble Truths, in his book called ‘The Dharma’:
The first two of the Four Noble Truths deal with the nature and cause of samsara. The Buddha describes the basic, world-producing cause as fundamental ignorance in the minds of all beings. This ignorance and its consequences can be analyzed as Twelve Links of Dependent Origination, that from the basis for a description of our experience of the world. The sequence of these links, nidanas, in the cycle of our experience is 1 fundamental ignorance, which leads to 2 Karmic formations. These become expressed in 3 dualistic consciousness, which in turn translated into 4 a sense of identification, and the initial differentiation of consciousness into 5 the various sense fields. Through these sense fields there is 6 contact with phenomenal world; from contact arises 7 sensation. Based upon sensation arises 8 craving for experience, followed by 9 grasping. On the basis of this, the mind harbors a sense of 10 becoming, a will to be, and this causes an actual physical incarnation. Once incarnate in a physical body, the mind experiences the various stages of human existence: 11 birth, and 12 the aging process and the stage of life that eventually lead to and end in death. At death the mind is immersed in basic ignorance again and the cycle is complete.
In the art piece above, the blue Tsugtung script translates as Natural law. This en-circles from the bottom clockwise, in the sequence of words in the Petsug script:
1. ignorence,
2. karmic propensities,
3. consciousness,
4. name and form,
5. six senses,
6. contact,
7. sensation,
8. craving,
9. grasping,
10. existence,
11. birth,
12. old age and death.
The small Tsugtung text at the base of the calligraphy translates as “this is the Twelve Links of Dependent Origination”. 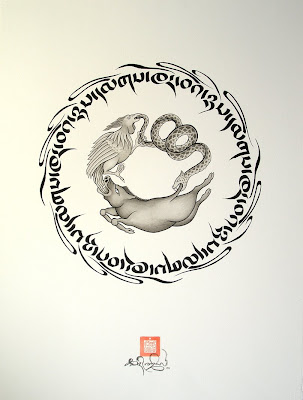 
One of the basic notions of Buddhism is that the ego of each individual is an illusion.
Each of these animals represents the one driving forces which maintain the illusion of a separate and constant change.
The aspect of the ego portrayed here are first, delusion, which is signified by the hog; secondly, greed and attachment, which is signified by the cock; and thirdly, hate and aversion, which is signified by the snake.Each of these aspects of ego is seen as feeding on another, perpetually in the cycle of Samsara.
It is common to find both these two philosophies depicted in the 'Wheel of Life' Thanka scrolls',
the Twelve Links of Dependent Origination arranged around the outer Wheel and the hog, cock and a snake in the center.

Because of craving, attachment and ignorance
Men, gods, animals, hungry ghosts and hell-beings
Foolishly go round,
Like the turning of a potter’s wheel.
Lalitavistara Sūtra
All images shown copyright Tashi Mannox.
Posted by inkessential at 22:12