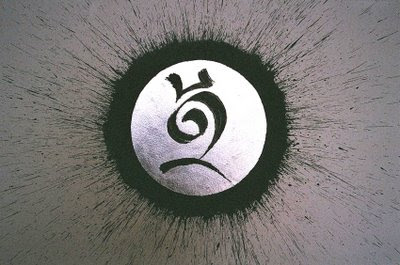 A detail of a piece called 'Vibration' the movement of energy that causes sound, the word sgra translates as sound or noise in Tibetan, calligraphy in the Drutsa script on a disk of Silver leaf, Tashi Mannox 2005. 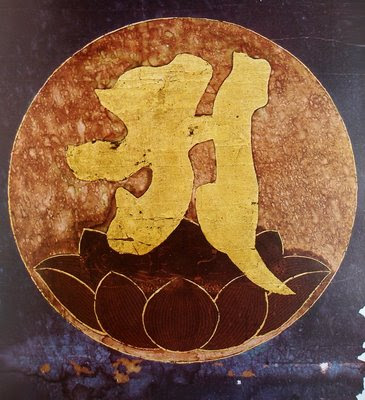 A Bija letter 'a' in the Japanese Siddham script. Being a key seed syllable of the vocalized expression of sound itself,  the letter 'a' is honorifically seated upon an open lotus, representing transformation with a back-rest of a sun disc representing purity.
The letter 'a' is the first letter of the Sanskrit alphabet, the last letter of the Tibetan alphabet. It is the root letter from where all quality of sound is born.
The first section of the Sanskrit alphabet is shown below in the Tibetan Uchen script, named by Tibetans as the 'ali kali' for its melodic rhythm as it is recited: om, a ah, i ih, u uh, ri rih, li lih, etc etc, normally chanted first thing in the morning as a blessing of speech.
Clearly the 'a' is the root sound to which the vowel signs added; change the quality of sound. 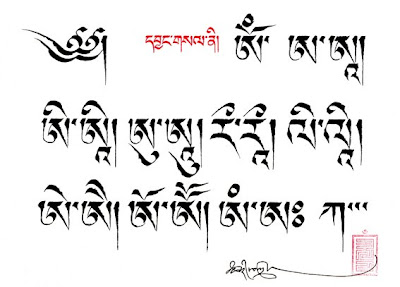 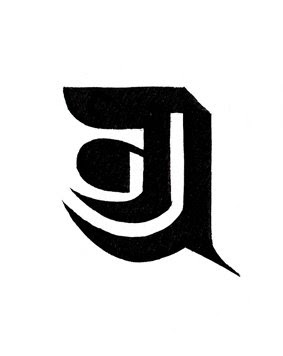 'a' in the Sanskrit Lanza script.
The seed syllable 'Ah' has a different spelling to the root letter 'a', in that a small 'a' is attached to the bottom of the main character, aspirating the sound:  'ah'
The sound 'ah' is traditionally used the express the quality of speech, as one of the 'Three Gates' meaning 'body, speech and mind'. 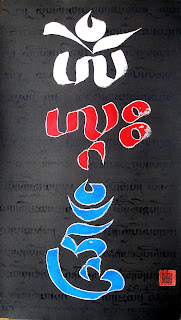 hum, blue in colour, located at the heart chakra, associated with quality of mind.
Depicted here in a Tibetan Umeh script style for the 'Black on Black' series. Tashi Mannox 2009 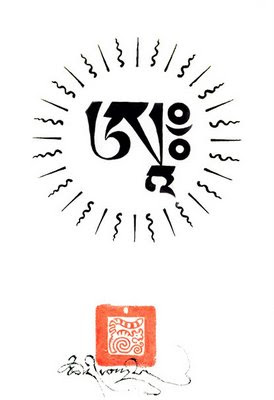 The character 'Ah' shown in the Tibetan Uchen script. 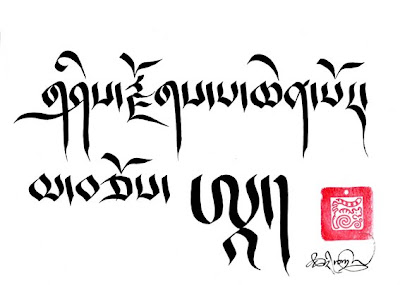 "The innate great perfection of the uncontrived ah"
Tibetan Drusta script 2009
Posted by inkessential at 21:19

Email ThisBlogThis!Share to TwitterShare to FacebookShare to Pinterest
Labels: syllable