Native Chinese and London educated 顾翔 Xiang Gu is a photographer and Graphic designer, that has the rare ability to join technology and design of east and west. His talent is clearly demonstrated in his fresh and innovative creations.

The above Graphic design by Xiang Gu is based on the word འཕུར་ 'phur in the Tibetan Uchen script. This is a word that has a number of meanings, such as 'rub' and 'scratch', but by the Art Deco appearance of the lettering, it seems that Xiang Gu has focused on the translation of phur as 'to fly'.


Below is another of his creations that shows the Tibetan alphabet in a neon like 'Tron' style font, though the letter design does not always follow the logical rules of the Uchen script, it is never-the-less a curious and modern take on the Tibetan alphabet.


More of Xiang Gu's work can be seen on his slick website and blog. 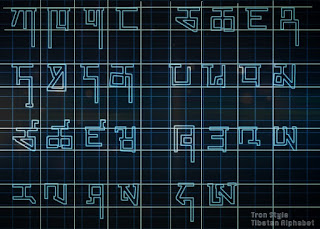 Tron has become a font style for the classic electronic game; based on the 1982 Tron Disney film about a programmer who gets stuck into his computer and it's electronic world.