The translation for swastika in Tibetan is "unchanging well-being" or "rest unshakably" a popular emblem in Tibetan iconography used to mark stability as well as a symbol of good luck.
An art piece previously not published as part of Tashi's Black on Black series, This particular piece is created using the words yungdrung གཡུང་དྲུང་ repeated four times to arrange as a mandala of unchanging well-being. These Tibetan letters gilded in silver leaf to give an etched effect standing proud on the blackened textured board, as the below image details demonstrate.
In the bottom right corner accompanying two of the artists personal seals are the words "the mandala of unchanging well-being" ༄། གཡུང་དྲུང་འཁྱིལ་བ། that is only caught in certain light or angle that painting is viewed.
The artists signature appears untypical and lavish across the bottom width of the canvas size, painted in a free brushed expression that is actually a remanent from an earlier discarded art piece, re-used to an attractive effect and multi layering and texture to the over-all piece. Other words that translate as "the great gesture" "Mahamudra" are hidden and pushed to the background by the illuminated silver lettering. 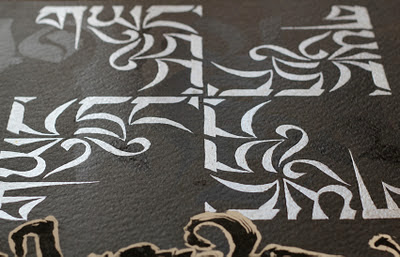 During the 17 years of being a monk, Tashi Mannox spent four in a cloistered retreat, The photo below was taken in 1988 at the begining of the retreat, that shows Tashi seated in his 'meditation box'. This limited  space of about a meter square doubled as his bed, as it is required to sleep up-right to maximize time spent in meditation during the retreat. Chalked below the box was a swastika as protection and a symbol of stability and well-being. As Tashi commented "though it took some months of getting used to, the meditation box became a place to 'rest unshakably' with only one's mind as a distraction". 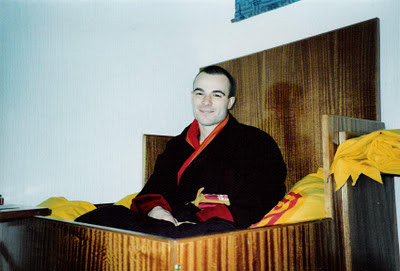 ࿗
To read more about the symbology and relevance of the swastika, there is an earlier post on the subject here.
Posted by inkessential at 16:23