The 16th Gyalwa Karmapa, is well known for his visions and prophesies, one such divine manifestation is commonly known as the 'Kagyu flag' and more famously called the 'dream flag', in reference to the fact that the banner appeared to him in a dream.

He  named the banner 'namkhyen gyaldar' meaning "Victorious Flag of Buddha’s Wisdom”.
Imparting the details of his vision to his close disciples, His Holiness Karmapa went on to proclaim:

“Wherever this banner is flown the Dharma will flourish.”


Since the birth of the flag, there has evolved a few different versions of the Karmamap's dream flag, most of these versions seem to have strayed from the flags' original legacy; as perhaps its new creators simply did not know and appreciate the profundity of its sacred geomantic construction.

This blog post is to explain and re-introduce the original proportionate construction and meaning behind the banner. There is also a true version of the dream flag that can be freely taken and reproduced for your own purposes, found at the bottom of this post.

During the early 90's Tashi was asked to reproduce the Dream flag by the Samye Ling Monastery in Scotland, who's intention was to donate the flag to Karma Kagyu Buddhist establishments around the world, in order to replicate the flag correctly, in respect of its original design.
Tashi was privileged to have first-hand authentication of the original banner design to him from two different sources:

One such original design of the banner hangs framed on a wall of a The seat  monastery of H E Jamgon Khontrul Rinpoche in Pullahari, above Boudha, Kathmandu.
Tashi was sent to investigate the flag with instructions to take notes so to replicate the flag correctly to the right design and dimensions.
The other reference of the flag, was personally explained to Tashi by H E Situ Rinpoche. As Situ Rinpoche was witness to the original creation of the flag while together with his Guru H.H. the 16th Karmapa.


The proportionate construction of the dream flag. 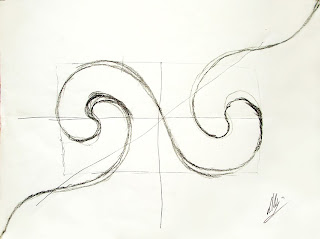 The sketch above is by the hand of Situ Rinpoche, (note his signature bottom right) who made the drawing especially for Tashi, explaining the geomantic arrangement of how the two waves are approached and swirl together from all four directions: two sides, top and bottom.
It is also important to noted that in this drawing; the over-all dimensions of the flag was dependent on the dimension of the piece of paper to hand at the time. Never-the-less, the same proportionate construction of the waves should not be altered from their horizontal axis when applied to a more standard 2:1 flag proportion, as shown in the image below.

Situ Rinpoche explained further that the center point of the two waves/swirls should be at the same horizontal plain, contained within the rectangular construction box (as he indicated in his drawing above), this 'construction box' should be placed squarely at the center of the flag and not on a sloping angle, (as many other versions of the dream flag are reproduced)


The possible reason for the misinterpretation of the wave alignment placed on a sloping axis in other corrupted versions of the flag, could have been confused with to the angular division between the two colours of yellow on the bottom side and blue on the top. This division runs from bottom left up to top right corners, as if aspiring from earth to heaven.
It seems that such profundity of design could have easily been overseen, if not fully understood while creating the banner and lead to the misrepresentation of the dream flag.

The correct proportionate lined construction of the banner is shown more precisely on the diagram below. This is has also been designed to fit with the international standard 2:1 flag proportion.


The colours of the Flag.

Moreover, Situ Rinpoche explained the colours of the flag to be a bright  sky blue and should not be too dark, the yellow should be earth like, not Lemon yellow and compliment the sky blue in tonal brightness, as the far below colour image  shows.


To demonstrate the correct balance of tone, the flag colours in the image directly below, have been converted to black and white.
As you can see there is little difference between the tones, which indicates a similar balanced in brightness within the colours.
The contrast that catches the eye is more in the colour rather than with the tone, as the particular blue and yellow used is far apart in the colour spectrum and complimentary.


The meaning behind the dream flag.
"Victory Banner of Buddha Wisdom”

The elements of the flag's geomancy and colours are symbolic of the relative and absolute truth. Relatively the colours blue and yellow represent the sky and the earth, the waves symbolize the Buddha Dharma.
On the absolute level the colours represent the union of emptiness and clarity, the true nature of mind. The intertwining waves symbolizes the union of compassion and emptiness, which is the essence of all phenomena.


Please feel free to take this above image for your own use and publish it in keeping with the Karmapa's wishes: that wherever this flag graces, Dharma will flourish. 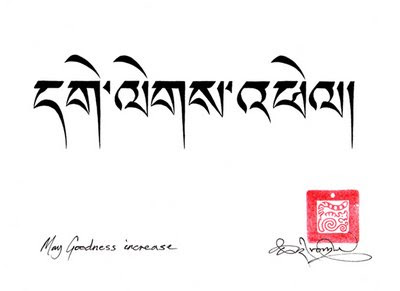