In June this year 2012, Tashi was contacted by a Tibetan man called Yeshi who lives in the Eastern Tibetan/Chinese Provence of Yunnan. So eager was Yeshi to commission Tashi to create a calligraphy, he made a long distance phone-call from the capital Kunming to discuss the phrases Yeshi wanted in the Khyug (quick style) Tibetan calligraphy.

The chosen phrases was a four line stanza to generate a mind of Enlightenment (as below), originally composed by the great Indian scholar Shantideva, who was the author of some of the greatest Buddhist works, such as the Bodhicharyavatara.

The phone-call and request was somewhat of a surprise to Tashi, who asked Yeshi why he needed to ask an Englishman half way around the world to create a Tibetan calligraphy to send back to Tibet and surely their must be somebody more local to him, such as a Lama who could elegantly scribe the stanza. Yeshi replied that it was very difficult to find a person who is able because the Tibetan written language was little practiced and much forgotten. 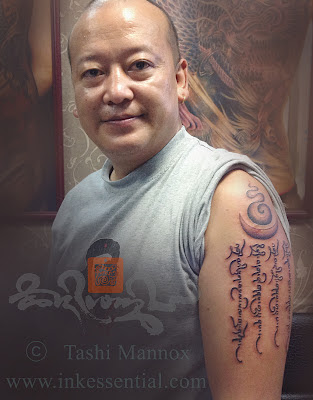 Above is Yeshi, proudly wearing his new tattoo, that is important to him representing the Tibetan heritage he belongs, as well as the wisdom in it's meaning of Bodhicitta; poetically expressed in the calligraphy that is topped with a crescent moon and Bindu like sun, inspired by another of Tashi's iconic artworks called "Precious Human Existence".

The conservation of the Tibetan written language and its many script styles is at the heart of Tashi's work as a contemporary Tibetan calligraphy artist.